The gate control theory of pain asserts that non-painful input closes the “gates” to painful input, which prevents pain sensation from traveling to the central nervous system. Therefore, stimulation by non-noxious input is able to suppress pain.

First proposed in 1965 by Ronald Melzack and Patrick Wall, the theory offers a physiological explanation for the previously observed effect of psychology on pain perception. Combining early concepts derived from the specificity theory and the peripheral pattern theory, the gate control theory is considered to be one of the most influential theories of pain because it provided a neural basis which reconciled the specificity and pattern theories and ultimately revolutionized pain research.

Although there are some important observations which the gate control theory cannot explain adequately, it remains the theory of pain that most accurately accounts for the physical and psychological aspects of pain perception. 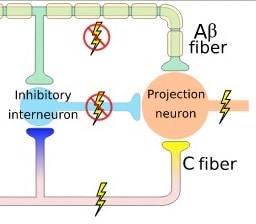 Gate control theory asserts that activation of nerves which do not transmit pain signals, called nonnociceptive fibers, can interfere with signals from pain fibers, thereby inhibiting pain. Afferent pain-receptive nerves, those that bring signals to the brain, comprise at least two kinds of fibers – a fast, relatively thick, myelinated “Aδ” fiber that carries messages quickly with intense pain, and a small, unmyelinated, slow “C” fiber that carries the longer-term throbbing and chronic pain. Large-diameter Aβ fibers are nonnociceptive (do not transmit pain stimuli) and inhibit the effects of firing by Aδ and C fibers.

The peripheral nervous system has centers at which pain stimuli can be regulated. Some areas in the dorsal horn of the spinal cord that are involved in receiving pain stimuli from Aδ and C fibers, called laminae, also receive input from Aβ fibers. The nonnociceptive fibers indirectly inhibit the effects of the pain fibers, ‘closing a gate’ to the transmission of their stimuli.[7] In other parts of the laminae, pain fibers also inhibit the effects of nonnociceptive fibers, ‘opening the gate’. This presynaptic inhibition of the dorsal nerve endings can occur through specific types of GABAA receptors (not through the α1 GABAA receptor and not through the activation of glycine receptors which are also absent from these types of terminals). Thus certain GABAA receptor subtypes but not glycine receptors can presynaptically regulate nociception and pain transmission.

Gate control theory thus explains how stimulus that activates only nonnociceptive nerves can inhibit pain. The pain seems to be lessened when the area is rubbed because activation of nonnociceptive fibers inhibits the firing of nociceptive ones in the laminae. In transcutaneous electrical nerve stimulation (TENS), nonnociceptive fibers are selectively stimulated with electrodes in order to produce this effect and thereby lessen pain.

One area of the brain involved in reduction of pain sensation is the periaqueductal gray matter that surrounds the third ventricle and the cerebral aqueduct of the ventricular system. Stimulation of this area produces analgesia (but not total numbing) by activating descending pathways that directly and indirectly inhibit nociceptors in the laminae of the spinal cord. Descending pathways also activate opioid receptor-containing parts of the spinal cord.

Afferent pathways interfere with each other constructively, so that the brain can control the degree of pain that is perceived, based on which pain stimuli are to be ignored to pursue potential gains. The brain determines which stimuli are profitable to ignore over time. Thus, the brain controls the perception of pain quite directly, and can be “trained” to turn off forms of pain that are not “useful”. This understanding led Melzack to assert that pain is in the brain.

The Gate Control Theory of Pain was eventually expanded with the Neuromatrix Theory of Pain. This theory states that the perception of painful stimuli does not result from the brain’s passive registration of tissue trauma, but from its active generation of subjective experiences through a network of neurons known as the neuromatrix. The theory was proposed by Ronald Melzack in 1996.

This allows for the way people respond to pain differently because it is influenced by different factors, like personality, temperament, past experiences of pain or trauma, cultural or familial attitudes toward pain etc. Some of these factors are genetically determined; others are formed earlier in life.

The expansion to the Theory can really be seen in Childbirth because women react to the pain of labor in such varied ways.