A fetus is a prenatal human between its embryonic state and its birth. The fetal stage of development tends to be taken as beginning at the gestational age of eleven weeks, i.e. nine weeks after fertilization. In biological terms, however, prenatal development is an unbroken continuum, with no clear defining feature distinguishing an embryo from a fetus. The use of the term “fetus” generally implies that an embryo has developed to the point of having recognizable features; this is the point usually taken to be the ninth week after fertilization. A fetus is also characterized by the presence of all the major body organs, though they will not yet be fully developed and functional and some not yet situated in their final anatomical location.

Weeks 9 to 16
The fetal stage commences at the beginning of the ninth week.  At the start of the fetal stage, the fetus is typically about 30 millimetres (1.2 in) in length from crown to rump, and weighs about 8 grams. The head makes up nearly half of the fetus’ size. Breathing-like movement of the fetus is necessary for stimulation of lung development, rather than for obtaining oxygen. The heart, hands, feet, brain and other organs are present, but are only at the beginning of development and have minimal operation. The genitalia of the fetus starts to form and placenta becomes fully functional during week 9.

At this point in development, uncontrolled movements and twitches occur as muscles, the brain, and pathways begin to develop.

Weeks 17 to 25
A woman pregnant for the first time (primiparous), typically feels fetal movements at about 21 weeks, whereas a woman who has given birth at least once (multiparous), will typically feel movements by 20 weeks. By the end of the fifth month, the fetus is about 20 cm (8 inches) long.

Weeks 26 to 38
The amount of body fat rapidly increases. Lungs are not fully mature. Thalamic brain connections, which mediate sensory input, form. Bones are fully developed, but are still soft and pliable. Iron, calcium, and phosphorus become more abundant. Fingernails reach the end of the fingertips. The lanugo, or fine hair, begins to disappear, until it is gone except on the upper arms and shoulders. Small breast buds are present on both sexes. Head hair becomes coarse and thicker. Birth is imminent and occurs around the 38th week after fertilization. The fetus is considered full-term between weeks 36 and 40, when it is sufficiently developed for life outside the uterus. It may be 48 to 53 cm (19 to 21 inches) in length, when born. Control of movement is limited at birth, and purposeful voluntary movements develop all the way until puberty. 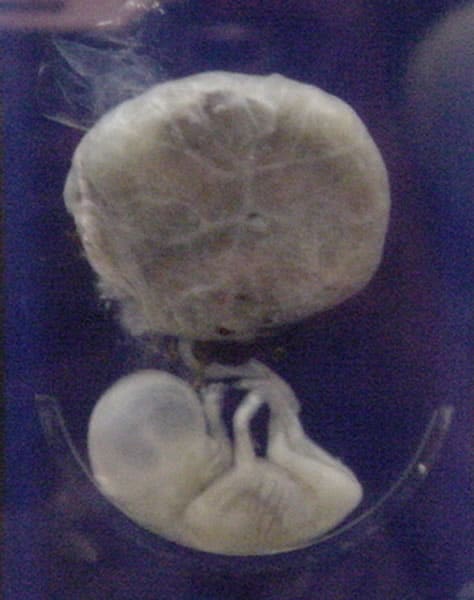 A human fetus, attached to placenta at 12 weeks
National Museum of Health and Medicine
Public Domain