The drama triangle is a social model of human interaction – the triangle maps a type of destructive interaction that can occur between people in conflict. The Drama Triangle was conceived by Stephen Karpman, M.D, so it is sometimes referred to as “Karpman’s triangle”.

Karpman used triangles to map conflicted or drama-intense relationship transactions. The Karpman Drama Triangle models the connection between personal responsibility and power in conflicts, and the destructive and shifting roles people play. He defined three roles in the conflict; Persecutor, Rescuer (the one up positions) and Victim (one down position). Karpman placed these three roles on an inverted triangle and referred to them as being the three aspects, or faces of drama. Karpman, who had interests in acting and was a member of the Screen Actors Guild, chose the term “drama triangle” rather than the term “conflict triangle” as the Victim in his model is not intended to represent an actual victim, but rather someone feeling or acting like a victim.

The Victim: The Victim’s stance is “Poor me!” The Victim feels victimized, oppressed, helpless, hopeless, powerless, ashamed, and seems unable to make decisions, solve problems, take pleasure in life, or achieve insight. The Victim, if not being persecuted, will seek out a Persecutor and also a Rescuer who will save the day but also perpetuate the Victim’s negative feelings.

The Rescuer: The rescuer’s line is “Let me help you.” A classic enabler, the Rescuer feels guilty if he/she doesn’t go to the rescue. Yet his/her rescuing has negative effects: It keeps the Victim dependent and gives the Victim permission to fail. The rewards derived from this rescue role are that the focus is taken off of the rescuer. When he/she focuses their energy on someone else, it enables them to ignore their own anxiety and issues. This rescue role is also very pivotal because their actual primary interest is really an avoidance of their own problems disguised as concern for the victim’s needs.

Initially, a drama triangle arises when a person takes on the role of a victim or persecutor. This person then feels the need to enlist other players into the conflict. As often happens, a rescuer is encouraged to enter the situation. These enlisted players take on roles of their own that are not static, and therefore various scenarios can occur. For example, the victim might turn on the rescuer, the rescuer then switches to persecuting.

The motivations for each participant and the reason the situation endures is that each gets their unspoken (and frequently unconscious) psychological wishes/needs met in a manner they feel justified, without having to acknowledge the broader dysfunction or harm done in the situation as a whole.

In some cases, the relationship between the victim and the rescuer can be one of codependency. The rescuer keeps the victim dependent on them by encouraging their victimhood. The victim gets their needs met by having the rescuer take care of them.

Each triangle has a payoff for those playing it. The antithesis of a drama triangle lies in discovering how to deprive the actors of their payoff. 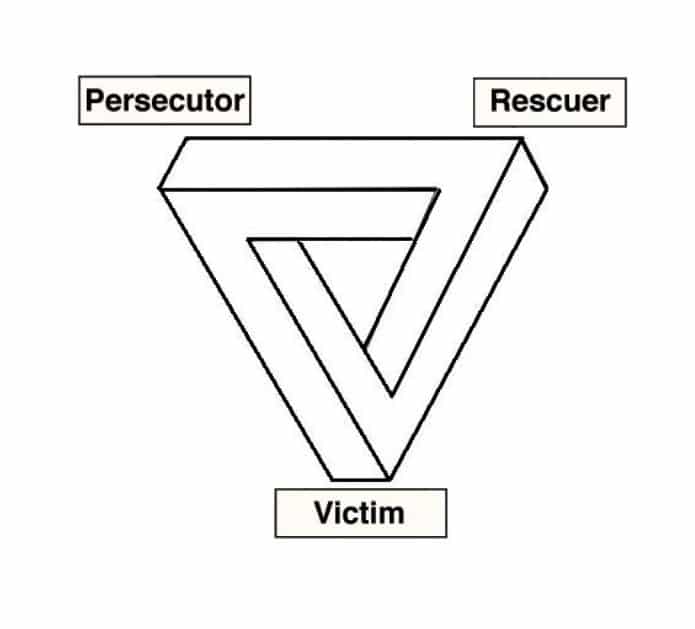