Dilation (or dilatation) and curettage (D&C) refers to the dilation (widening/opening) of the cervix and surgical removal of part of the lining of the uterus and/or contents of the uterus by scraping and scooping (curettage). It is a therapeutic gynecological procedure as well as the most often used method of first trimester miscarriage or abortion.

D&C normally refers to a procedure involving a curette, also called sharp curettage. However, some sources use the term D&C to refer more generally to any procedure that involves the processes of dilation and removal of uterine contents, which includes the more common suction curettage procedures of manual and electric vacuum aspiration.

The woman is typically put under monitored anesthesia care (MAC) before the procedure begins. The first step in a D&C is to dilate the cervix. This can be done with Hegar dilators. A curette, a metal rod with a handle on one end and a sharp loop on the other, is then inserted into the uterus through the dilated cervix. The curette is used to gently scrape the lining of the uterus and remove the tissue in the uterus. This tissue is examined for completeness (in the case of abortion or miscarriage treatment) or by pathology for abnormalities (in the case of treatment for abnormal bleeding).

Complications may arise from either the introduction or spreading of infection, adverse reaction to general anesthesia required during the surgery or from instrumentation itself, if the procedure is performed blindly (without the use of any imaging technique such as ultrasound or hysteroscopy).

One risk of sharp curettage is uterine perforation. Although normally no treatment is required for uterine perforation, a laparoscopy may be done to verify that bleeding has stopped on its own. Infection of the uterus or fallopian tubes is also a possible complication, especially if the woman has an untreated sexually transmitted infection.

Another risk is intrauterine adhesions, or Asherman’s syndrome. One study found that in women who had one or two sharp curettage procedures for miscarriage, 14-16% developed some adhesions. Women who underwent three sharp curettage procedures for miscarriage had a 32% risk of developing adhesions. The risk of Asherman’s syndrome was found to be 30.9% in women who had D&C following a missed miscarriage, and 25% in those who had a D&C 1–4 weeks postpartum. 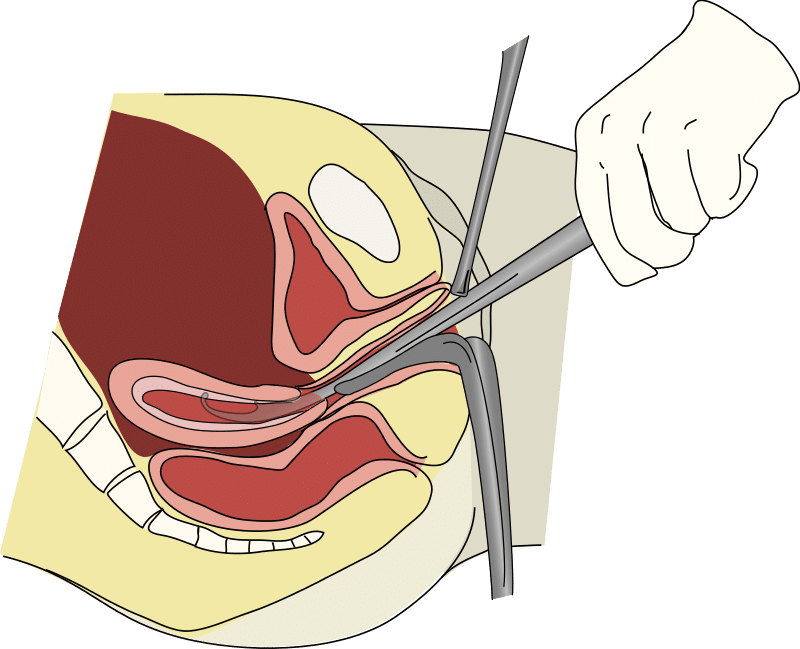 The American Congress of Obstetricians and Gynecologists