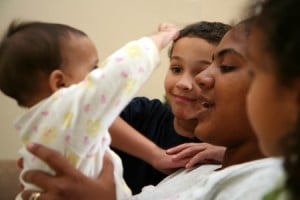 The peer reviewed journal PLOS One (Public Library of Science) has published a research study that shows that women that give birth to more children have an advantage in the survival game, and that advantage is called telomeres.

Telomeres are caps at the end of our DNA strand that protect our chromosomes – thread-like structures that contain all our genetic information – from damage.

Each time a cell replicates, the telomeres become shorter. Naturally they eventually become so short that they stop protecting our chromosomes, leaving them vulnerable to damage. This in turn causes our cells to age and stop functioning effectively. We call this getting older. It sucks and it pretty much happens to everyone, but apparently, not at the same rate!

This study conducted by Prof. Pablo Nepomnaschy and Cindy Barha – of Simon Fraser University – suggests the mind blowing idea that the more children a mother has, the slower she may age.

The researchers enrolled 75 Kaqchikel Mayan women from two neighboring communities in the southwest highlands of Guatemala, assessing how many children the women gave birth to between 2000-2013.

They began the study by measuring the women’s telomere length by taking saliva samples. (Please spit in this cup for science!) They then measured the length of the telomeres again 13-years later. The research team found that women who had a higher number of surviving children over the course of 13 years had longer telomeres than those who gave birth to fewer surviving children; each additional child born was linked to 0.059 more telomere units.

They did not say what they were doing during the 13 years between the spit taking.

These results were cross checked with other possible factors, including the women’s age, their age at first birth, their age in 2013, lifestyle habits and family income.

When asked about their crazy spit-science the researchers said:
“Our analyses show that increased offspring number across 13 years of observation attenuated telomere shortening, suggesting that, in our study population, having more children may slow the pace of cellular aging.”

So how can having more kids cause this to happen? If anything, I would think the stress of motherhood would cause us to die sooner!

The researchers think it has to do with increased estrogen production in pregnancy.

Prof. Nepomnaschy hypothesizes that their findings may be explained by an increase in the hormone estrogen that arises during pregnancy. “Estrogen functions as a potent antioxidant that protects cells against telomere shortening,” he explains.

So get the word out…have more babies.